It's gonna be a bright, sunshiny day! 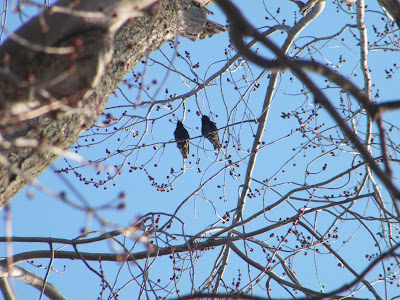 I woke up a little bit early this morning, thanks to the birds outside my window. I like birds, really I do, but sometimes I just want to have cat-like reflexes and the jumping prowess of a flea, grab them before they fly away, and give them a stern talking-to! (Can you imagine what I would look like, leaping into a tree with my hands outstretched, face curled up in a diabolical snarl?)

Anyways, I didn't mind too much, because I was having a friend over for breakfast (no, I wasn't going to EAT her, I was making breakfast FOR her....) and I had some things to get done before she got here.

I know I'm a dork, but I've never had a friend over for breakfast before. I was stupidly excited about it, since Thursday when we made plans. I had to have the best breakfast ever, since I will always and forever try to be the most excellent hostess, so I decided to make waffles from scratch! Hurray!

I found a recipe on this blog, http://dylansglutenfreedom.blogspot.com, for gluten free waffles. Here's the recipe:

2 – cups flour (you can use your favorite Gluten Free flour or baking mix)
2 – tablespoons sugar (if you are using a mix of different flours and in the ingredients it has sugar already, the extra sugar mentioned here may not be needed!)**
1 – tablespoon baking powder*
½ - teaspoon salt*
1 ¾ - cups milk
6 – tablespoons vegetable oil (I found that olive oil works just as well)
2 – large eggs
½ cup chocolate chip morsels (optional)


So, I made that, and then I melted some butter, vanilla and brown sugar in a pan, dumped in some mixed frozen fruit (peaches, strawberries, and mangoes... yummy) and cooked them until they were just a little bit soft. I served the fruit over the waffles, with a light drizzle of real maple syrup. It was SO GOOD.

I forgot to take pictures, because Steph and I were gabbing so much. Plus it may have weirded her out if I had grabbed my camera for seemingly no reason and started taking pictures of her plate. Ha.

So, that's what I did with my day off. I haven't accomplished much else, but at least I had a good breakfast.
Posted by Sarah at 6:59 PM 4 comments:

It is so not Stewie's birthday anymore.

But I don't really have time to say anything else. Too many dishes to do and hairs to vacuum up and papers to file away and dead flies to sweep into oblivion.
Posted by Sarah at 3:07 PM 4 comments: 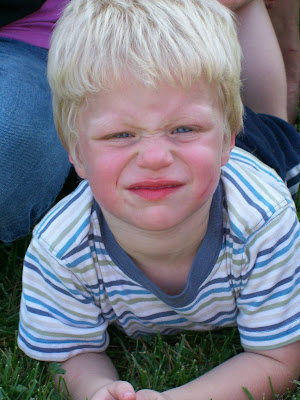 This is my favourite picture of Stewart. It's old, I took it in 2007, but he was just too cute with his lil' wrinkled up nose and red cheeks!

Happy Birthday, Stewart! Hope you enjoy your sleepover with Michael-man! 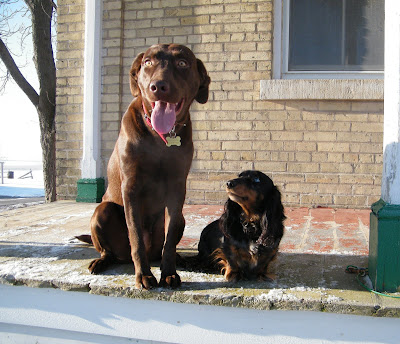 Aren't my girls pretty? Oh they are so pretty. If you don't think so, you're just a crazy cat lover. Or just plain crazy. 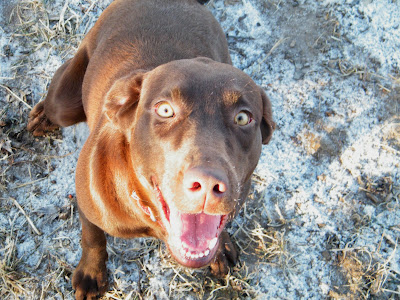 This is the face Brady makes when we play Fetch together. She's so ridiculously happy it hurts. You know, humans can take a lesson from dogs. They don't need ipods or computer games or blackberries or xboxes or playstations or whatever to have fun, all they need is a yard, a stick, and a person to throw said stick for them. Or they'll just hunt one down for themselves. 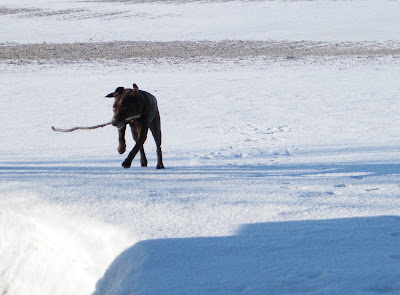 I took these pictures the last weekend Tyler worked and I was off.... sooo.... in February. I just haven't taken the time to post them until now. Plain laziness, I know. 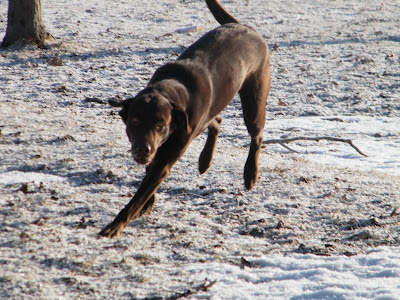 Brady, Lucy and I spent the whole morning outside that day. I took pictures and soaked up some sunshine, Lucy sniffed everything with that super sensitive nose of hers, and Brady ran all over the yard, stretching out those legs that couldn't run as fast when the snow was three feet deep. It was awesome. 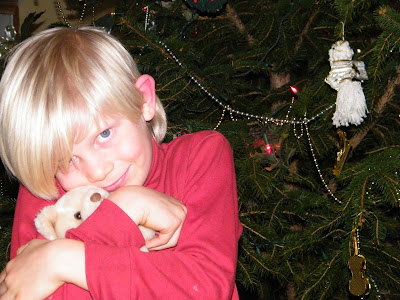 Ethan and his fabulous hair, of course.

Who can come up with a caption for this picture? I think it's cute enough to deserve a caption.

Anyways, Ethan is *8* years old today! WOW! I was at his mommy and daddy's house, babysitting big brother Justin, the very morning he was born. They left at 4:00-ish in the morning, and came back at 7:30 with a teeny-tiny, yoda-eared baby boy. He was so cute and wrinkly! And he had LOADS of white blonde hair. Not as much as he has now, but still, a lot for a baby. I was so excited to hold him, he was so brand new!

And I'm just as happy about him today as I was on that morning 8 years ago. Love you, Ethan! God bless you!

You got some 'splaining to do! 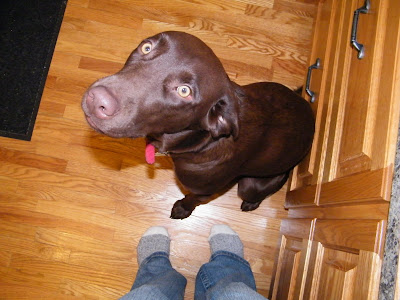 She is a very naughty doggy.

Whilst her blissfully unaware owners were at work, she got to work, too.

To pieces the cord that connects the speakers to the surround sound.
Pieces!

So, our naughty doggy has been demoted from her nice new cage kennel back to the boxy old plastic kennel, in which she can only see out of the door. It was one thing chewing a hole in the couch we don't really like, it's a completely other thing to chew to pieces part of an expensive electronic device! Consequences must be meted out.


Still, she is awful cute. For a pest. 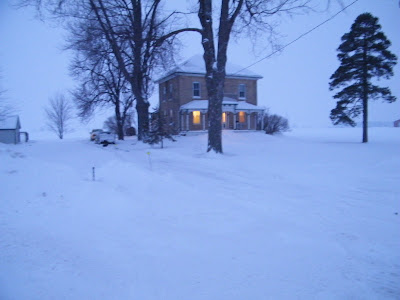 Doesn't the light just make the house look so warm?

Faced with the dreary, frigid winter, our little house keeps high spirits... it definitely isn't giving in to Winter! The angry season can rant and rave as much as it likes, our house isn't afraid. It will just keep holding in the heat, and keeping out the cold, all in an effort to keep the inhabitants safe and warm.

I love my warm house, a refuge against the bitter winds and freezing air.

However, I really really can't wait for Winter to end. We've had a few tastes of Spring lately, light thaws, warm sunshiny days, but so far Winter always came back. Sigh.

But today is March 1st! There is hope! Hope that soon, this Long Winter will at last lay down and go to sleep.

Welcome, March, and may you bring us more signs of Spring... Sunshine, warm breezes, thawing earth and muddy paws.
Posted by Sarah at 6:55 PM 6 comments: