I think I've said before on this blog (somewhere, sometime) that I hate alarm clocks. The screeching sound of an alarm clock is the worst sound ever, ever, ever.

Before I started my sick leave, the alarm clock wouldn't even wake me up, probably because Tyler and I worked at the same place and I knew he was going to jump out of bed and shut it off. Honestly, I didn't even hear it. Now that I'm done work, for some reason the alarm wakes me up, and since I'm hugely pregnant I have major problems getting back to sleep. Mostly because I have to wee wee when I wake up, and that involves getting out of a nice warm bed and walking to the bathroom, sitting on a cold toilet seat (darn you cold fall temperatures!) and then climbing back into a slightly less warm bed, alone, because the husband is downstairs getting his coffee made and going to work. Poopy.

That's what happened to me this morning, and to make it worse, I was hungry when I woke up. I can usually warm up after getting back into bed, because we have nice snuggly blankets, but I can't eat my pillow or the tissues beside my bed. I probably could eat the tissues, because they are small and fragile, but it would be gross and thinking about it is making me want to gag.


So, I came downstairs, got the fire going again and got some cereal, and now I'm going to go tidy up my kitchen and living room and wait for Deklan to wake up. Yes, he's still sleeping peacefully.... he's going to wake up full of energy, and I'll be a half asleep zombie mommy... at least I can still get him some breakfast (pouring yogurt into a bowl doesn't require me to have both eyes open at the same time) and turn the TV on for him.  Ugh, I hate TV. But I love it too. Stupid electronic babysitter of wonderfulness with a side of evil.

I rarely eat apple butter. By rarely, I mean once every 6 years. It's just not something that I pick up and put in the grocery cart when I'm shopping. This year, however, I had a big bushel (read: laundry basket... someday I'd like to get a real bushel to put apples in) full of apples from our tree to either do something with or let rot, and I hate seeing food go to waste.... I had to do something.
I didn't think I had enough apples to get a decent amount of applesauce, so I wanted to try my hand at apple butter.  I canned applesauce with my Mom when I was younger, so I knew (generally) how to do that, but making apple butter was new to me.
Since I am so very pregnant, my very lovely sister Linda came to help me make it! Due to an unforeseen alarm clock malfunction, she didn't get to my house until basically lunchtime, so we didn't start making the apple butter until 2:00-ish (girls gotta eat!!) so it wasn't actually finished the day she was there.... because, as it turns out, apple butter takes a heckahecka long time to make!
It didn't help that I kept on boobing everything up, leaving lids on the pots (FYI, you're supposed to cook the apple butter with the lids OFF the pots so the steam can escape... who knew? Not me! Deena did, and props to her for sharing her apple-butter-making secrets with me!) and being all pregnant and having to sit and put my feet up and take snack breaks and tea breaks and supper breaks.
Anyway, we started the process by washing the apples and cutting out their hairy butts and stems. Apple butter is actually way easier than applesauce to prepare, because you just cut up the apples, peels & cores & all, and throw the pieces in a pot with an itty bitty amount of water, cook them until they're soft and then grind them through the masher thingy to get the appley goodness separated from the pulpy crap. Then, you add spices (I added cinnamon and nutmeg, but not cloves because cloves are gross) and put it on the stove and cook it and cook it and cook it and cook it forever and ever and ever amen.
And since I knew I was starting my blog back up, and knew that I would want to blog about making apple butter, I very dutifully took pictures that day of Linda in the kitchen helping me make it. 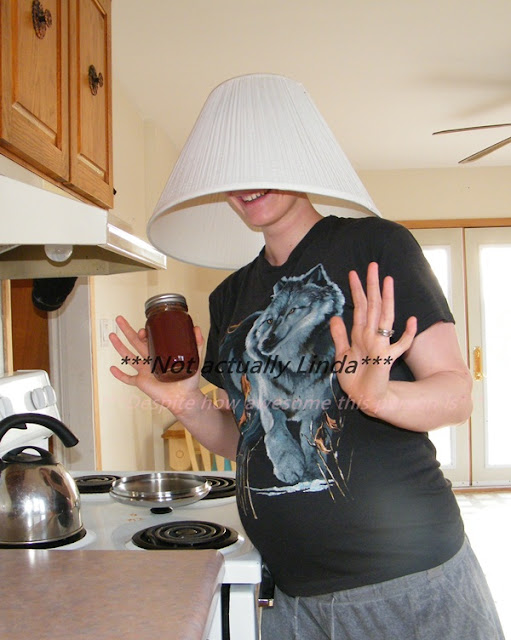 Yeah, Linda is so totally awesome. Look at her go! Make that apple butter! Shake what your Momma gave ya!
My laundry basket full of apples made a lot more apple butter than I thought it would! All three of my big pots were full to the brim. Of course, by the time the apple butter was ready to can, all three pots were half full because it has to cook down so much.
It was three days later before I actually canned anything... Adeena, Jeff & the kids came over to our place for dinner and a movie, and Adeena helped me can my first batch! I was so happy. It was a momentous occasion for sure!
These have been sitting on my countertop for a week, and they may just stay there all Winter, because I love looking at them and knowing that all the work I put into making apple butter paid off! :D 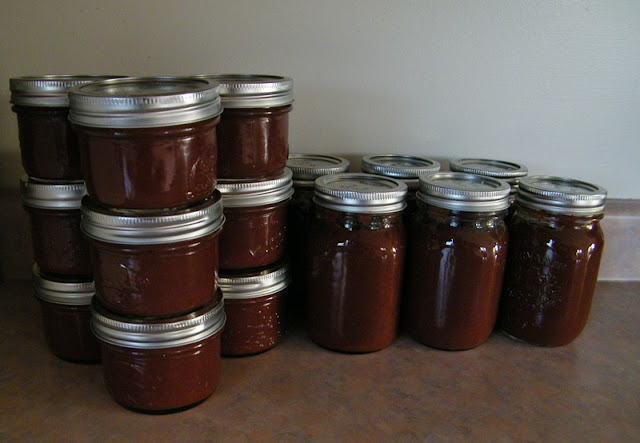 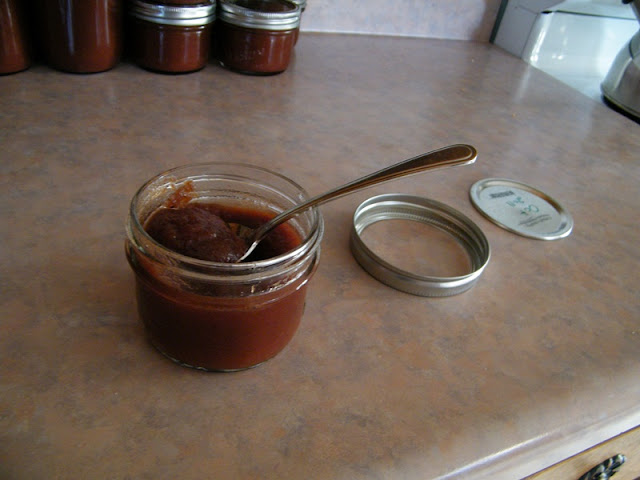 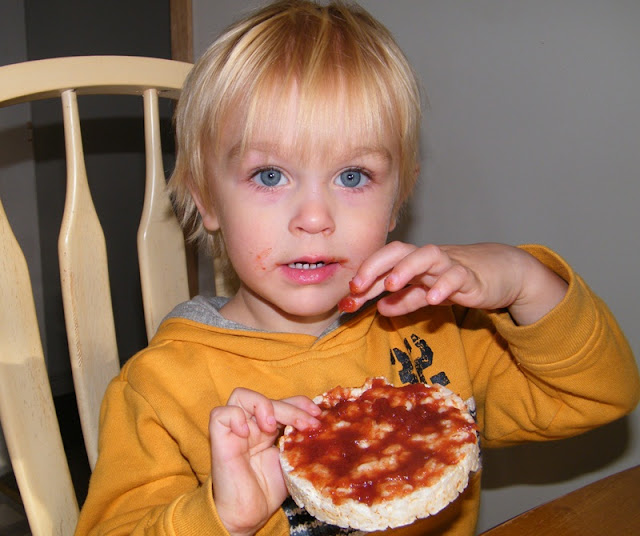 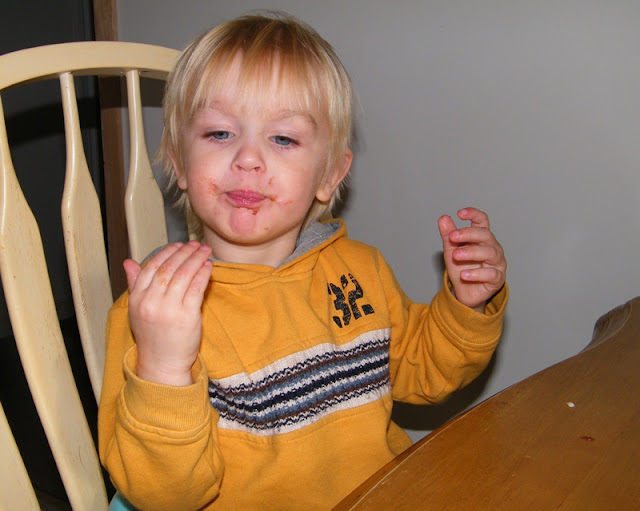 Deklan likes it, Tyler likes it, I like it, and we get to enjoy it for hopefully the next few months before it's all gone!
Next year I'd like to can a lot more! Not just apple butter, many different things! I enjoyed it. :)
Posted by Sarah at 6:25 PM 7 comments:


It's been a long time since I last wrote a blog... long enough that I'm second guessing myself, typing and backspacing, typing and backspacing in a frenzy of indecision. I've started and stopped writing this post easily a dozen times.
The problem is, I'm not a planner. I like to think that I am, I strive to be one actually, but the truth is I'm best when I'm spontaneous, writing from my heart rather than from my head.  It doesn't help that I'm out of practice, the last blog I wrote was in May... and we're almost through October now. Eeek.
There's so much to tell you, so much has happened these past months that I've been absent from the blogosphere... too much for just one post. So I'm going to start with the obvious, the easy, the adorable... 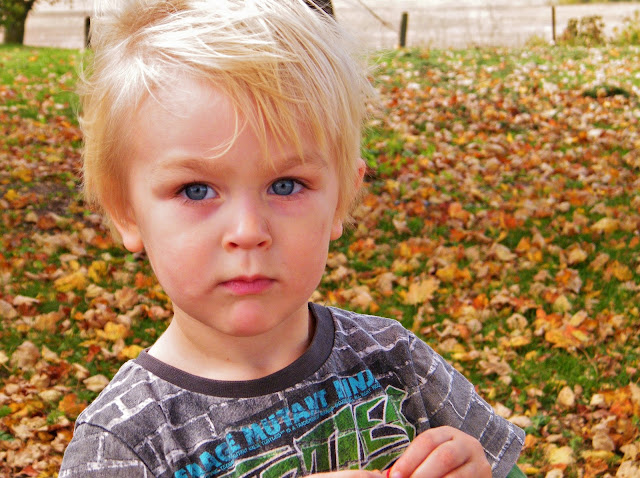