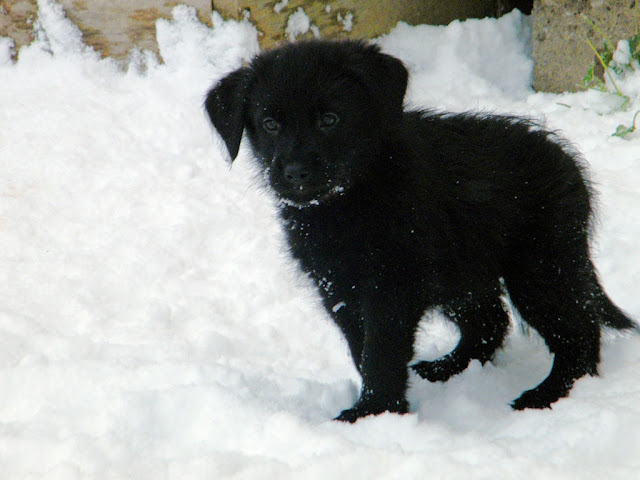 I built a wall of snow around my deck today.

It was a lot of work, and my arms are tired. However, my arms are not nearly as tired as my patience was, for my patience was being exercised to it's very limit with the task of gently coaxing curious, disobedient, and mischievous puppies out from the underbelly of the deck every day, day after day.

Now, when I let the puppies outside, they have no dark and muddy place to explore. Only snow and sunlight to play in! Take that, puppies!

My next task is to work on their recall. I call them "Puppies! Puuupppies!" and they look at me with a "Whaaat?" expression, and then sometimes they come, sometimes they don't. I think bribing them with treats will help.

I'm also working on house-training them, today is the first day that they have not had a spot to poop or pee in the house! We had wood shavings in their box before, but now they are in a big plastic dog crate, with a comfy blanket for bedding. So far, they've only pooped and peed outside today. I'm hoping to keep this streak going! :)

I'm hoping to get some more pictures of the puppies outside tomorrow.. I was too busy shovelling to get any pictures taken today!
Posted by Sarah at 11:52 PM 1 comment:

Today was a spectacularly warm and beautiful day. It was so inviting, I couldn't stay inside!

I decided to take the puppies outside to run and play, since it's been so cold and windy here lately that taking them outside would have been bad for their health.

The chores still needed to be done, so I pulled out Reid's playpen and put the puppies in it to keep them contained while I was busy in the barn. 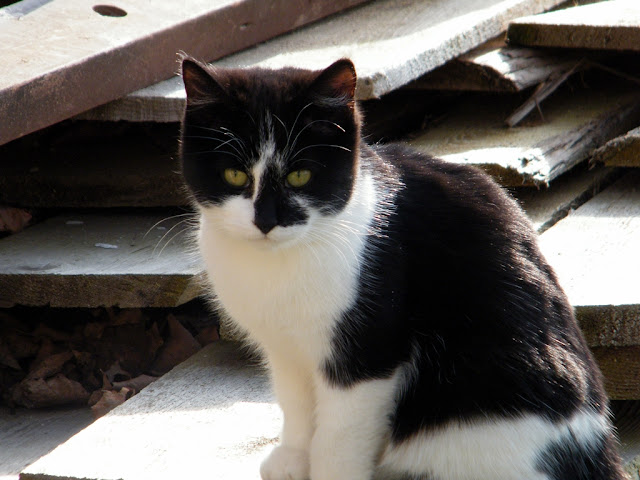 This is MoonPie. He's new. He showed up last week while we were filling in the trench in our backyard, the one I never wrote about on here so I don't know why I'm referring to it, but at any rate... I was shovelling dirt next to my deck, and a kitten peeked out at me upside down from the underside of the deck. He said "Mraow?" and I said "Here, Kitty kitty kitty!" and he came right to me. Within minutes, Deklan was carrying him around, and the kitten just purred and purred and purred. Deklan said "This is MY kitty!" and Tyler just sighed. We have a shed kitty, now. :D 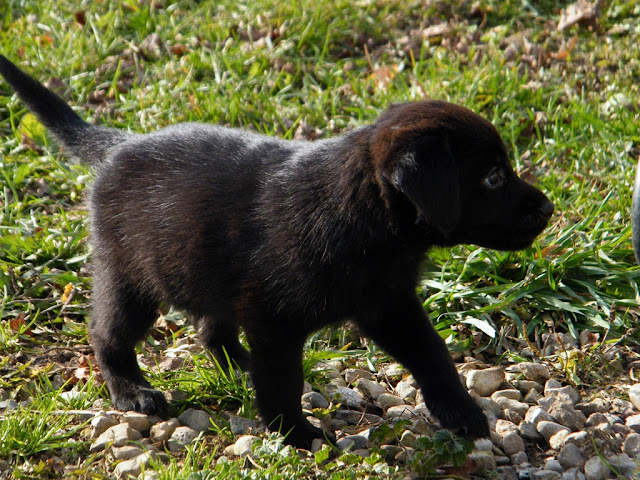 This puppy is one of the ones I really, really like... he's got such a lovely, sweet personality. I think he'll end up being mostly brown instead of black. 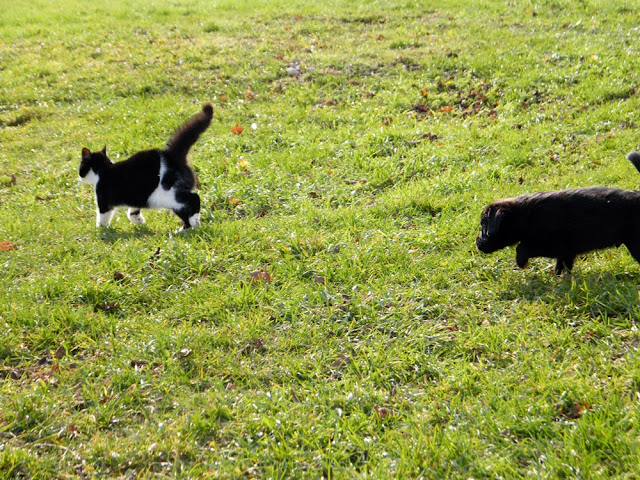 The cat was unimpressed by the attention the puppies gave to him. 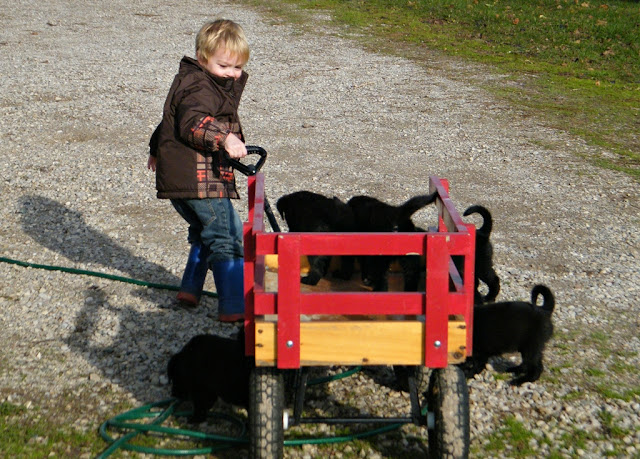 Deklan tried to give the puppies a ride on his wagon, but they kept on jumping out. They were brave little stinkers! It was a pretty big jump! He'd stop and try to put them back in, and any puppies left in the wagon would take advantage of the situation and jump out. It made me laugh. :D 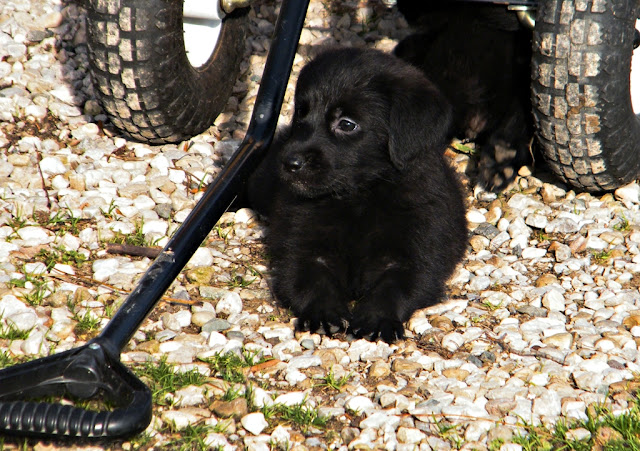 She's so cute and fuzzy! 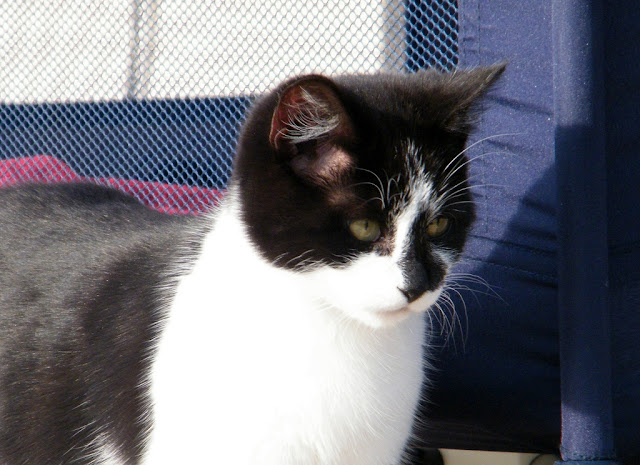 MoonPie is channelling his inner mountain lion. He kept on stalking the goats, it was hilarious! He thought they looked tasty. They are plump, and most probably juicy, because they've been packing on weight for winter.... but still, goat?! Surely there are more delicious things for you to stalk, MoonPie. 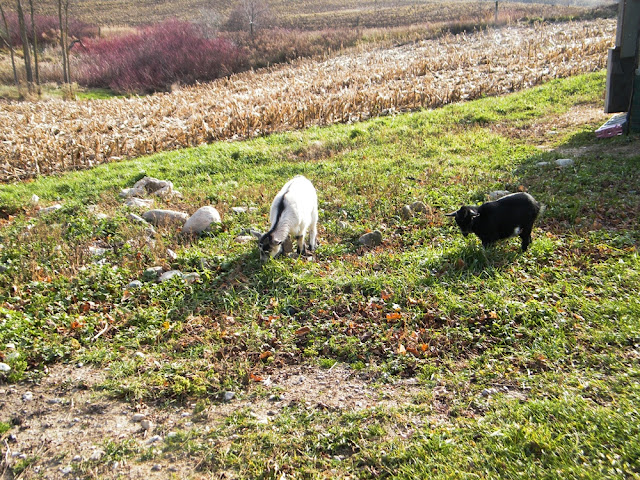 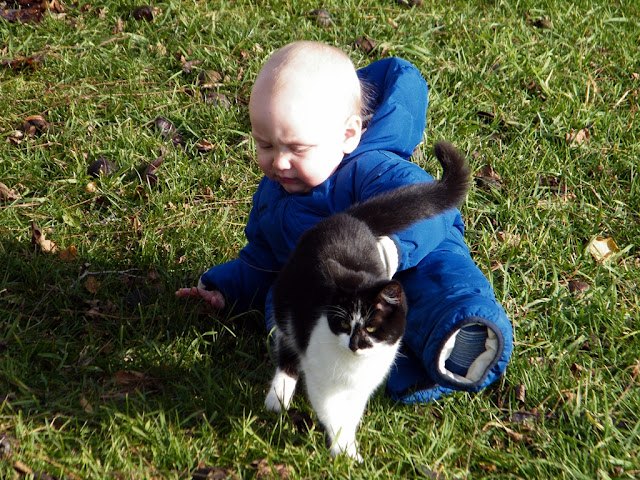 ...Like a juicy Baby! But, aww... Babies are so cuddly. Purrrr. Purrrrrrr. 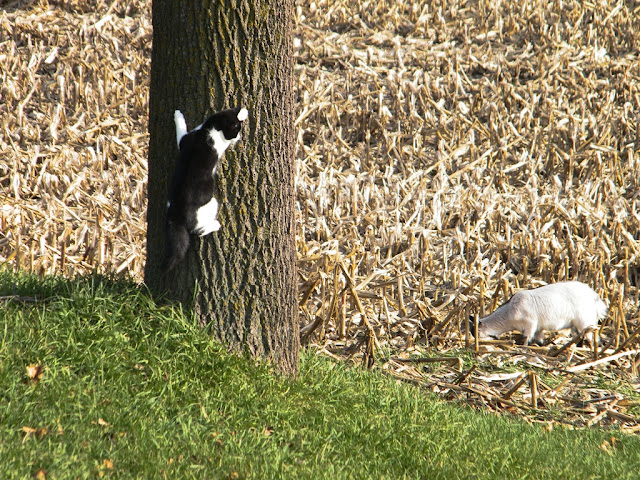 I've been taking a Literature class with some other members of my family, and at this week's lesson our assignment was to rewrite a classic tale into a play. The catch was, we could not use any letter S's in what we wrote!

Linda, Critter, Quinlan and I were on a team, and our tale to re-write was The Three Little Pigs.

Working together, we tweaked the story. I rather like what we came up with! Here it is, for your enjoyment!

Once Upon a Time,
the Piglet Trio,
with a wedge between them,
decided to build a different dwelling for each.

Pig One: I will make my home out of hay.

Pig Two: I will make my home out of wood.

Pig Three (the Clever Pig): I will dig my home out of the face of the Mountain!

Time rolled by, and the Piglet Trio lived contentedly, although alone.

One day, a hungry Wolf happened upon the hay dwelling. With terrible growling, he proclaimed

Pig One: Not by the hair of my chinny chin chin!

HE HUFFED, and he PUFFED, and BLEW THE HOME DOWN!

and he ran down the road, to the home made of wood.

Pig Two let him in, for the wolf followed right behind.

The Wolf gave a great knock on the door. He growled

Pig One: Not by the hair on my chinny chin chin!

Pig Two: Mine either!

And they ran up the hill, to the home carved into the face of the mountain, made of Rock.

Pig Three (the Clever Pig) let the other two in, then with a triumphant laugh he let free a volcanic eruption to obliterate the wolf!

Then he became King, and ruled all the land from the Mountaintop Lair.


That's what they'll call me. 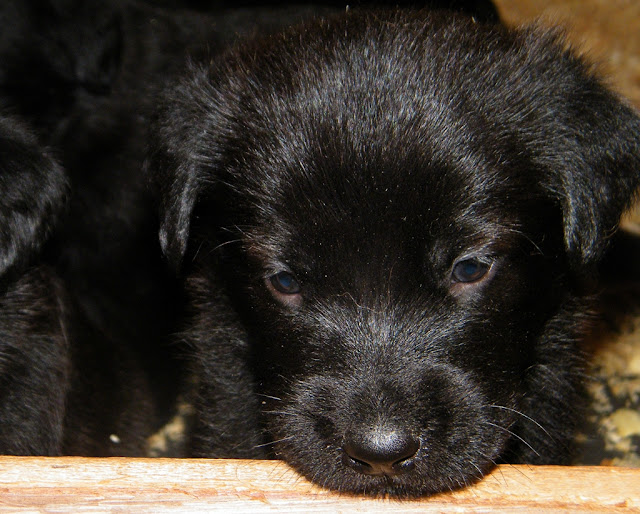 Because when they come to my door, 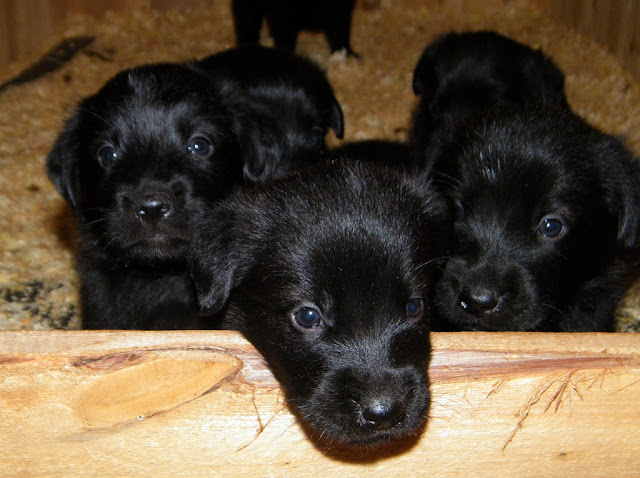 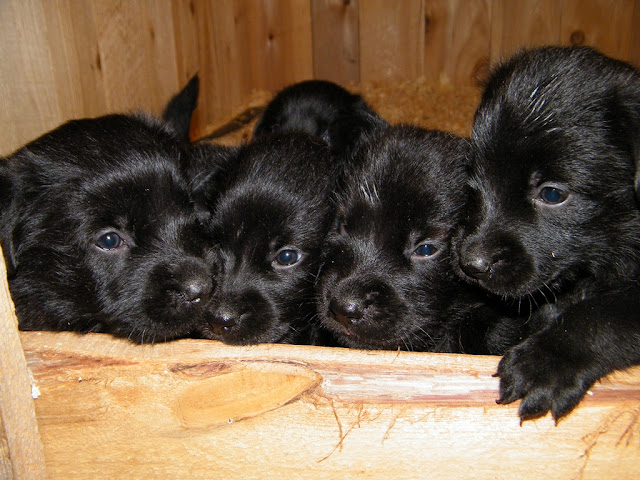 9 of them will be big, black, fluffy things, one will be a slightly smaller brown thing, and then one will be an almost unnoticeable teeny tiny black, brown & silver thing with big blue eyes. 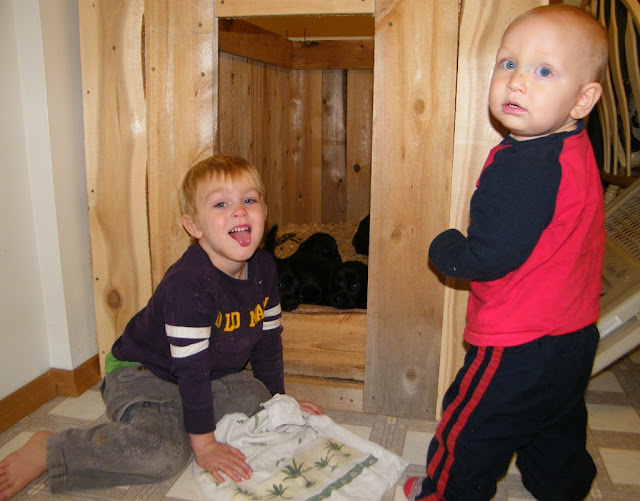 I warned Tyler.... I told him that when I was little, our family dog Tosha had three litters of puppies (until one day she took a fun car ride to the vet's and came home with less parts than she went in with!). At that time, I was a kid, I was powerless to actually keep the puppies I fell in love with. Now, I'm an adult. I can do whatever the heck I want! If I want 11 dogs, I'll have 11 dogs! HA HA HA HA HA HA!

Dogs in the Van

^I really identify with the woman in the van.

On another, somewhat related note, my boys are adorable. Deklan loves to play "mommy doggy" whenever Brady is out of the puppy pen. He lays down next to the puppies, and pulls up his shirt so he can "Nurse them, Mommy." Okay, Buddy! Whatever you say! :D

I usually have a baby gate across the door of the puppy pen (to keep the puppies in, and to keep the baby out..), and Reid loves to stand at it and watch the puppies playing. He said "Puppy" last week, Tyler heard him say it.. I didn't. :( I did hear him say "Kitty" at Granny's house this week, though! He's getting so big. He's almost ONE! Ack!

Well, it's rather late, and ALL my babies are sleeping. My relatively hairless babies, AND my hairy babies. They whine in their sleep. It's super adorable. The point is, Goodnight! ;)
Posted by Sarah at 11:51 PM 2 comments: