I am having a lot of trouble uploading these pictures today. I don't like the new blogger picture uploader, I think the old one was WAY better. :/
BUT, I will not fail! I will try again and again until these pictures are up!
Here we go......
Aha! Looks like it's working!
The first one is from yesterday's "Pink" photo shoot, I just loved his expression so much I had to include it. :)
The rest are from this morning. I know it's not technically his 14 month birthday, but I took his 13 month pictures last month around this time, sooo... It's all good. 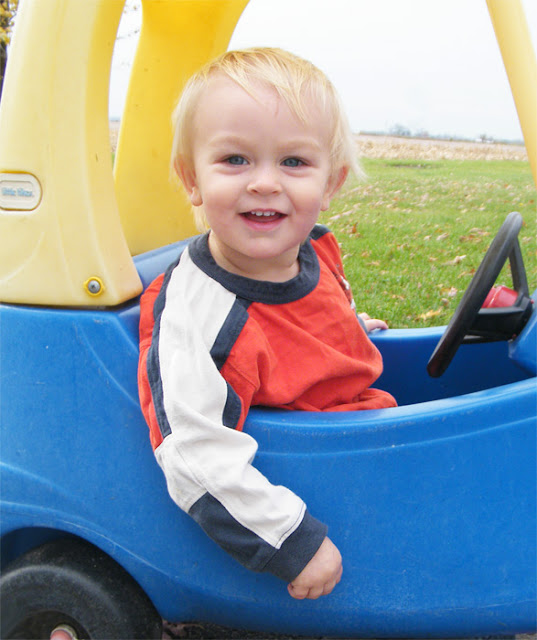 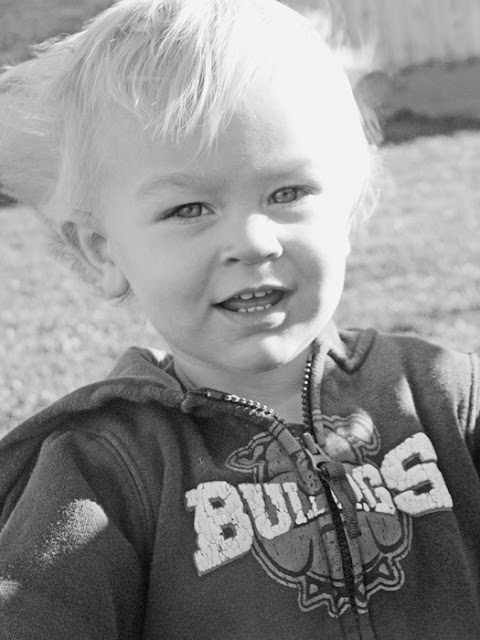 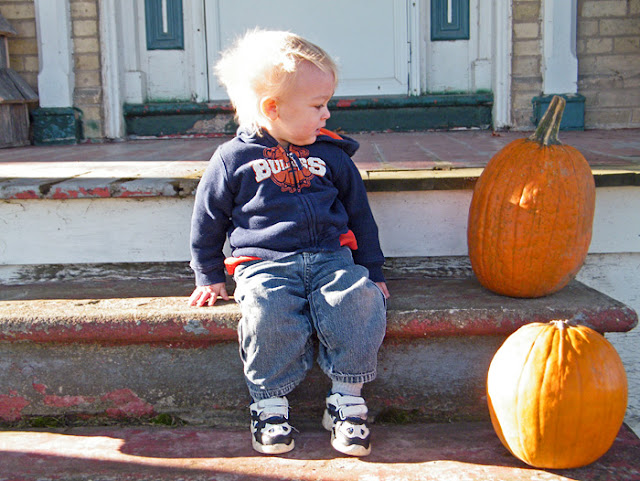 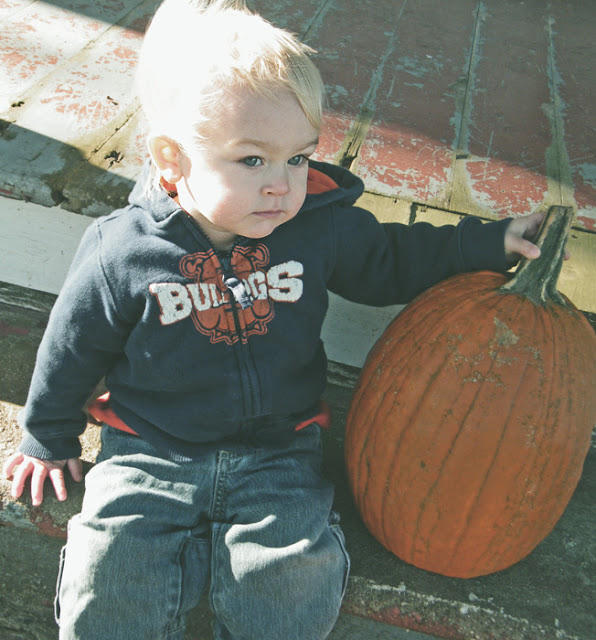 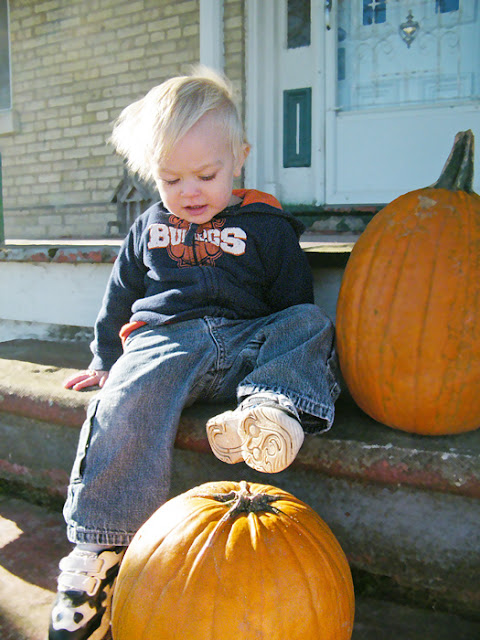 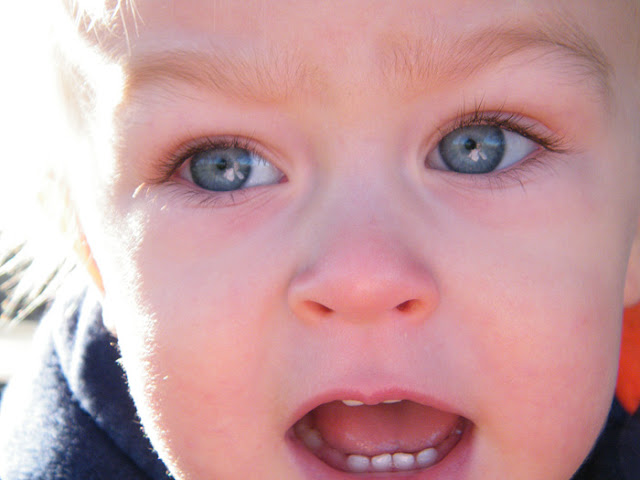 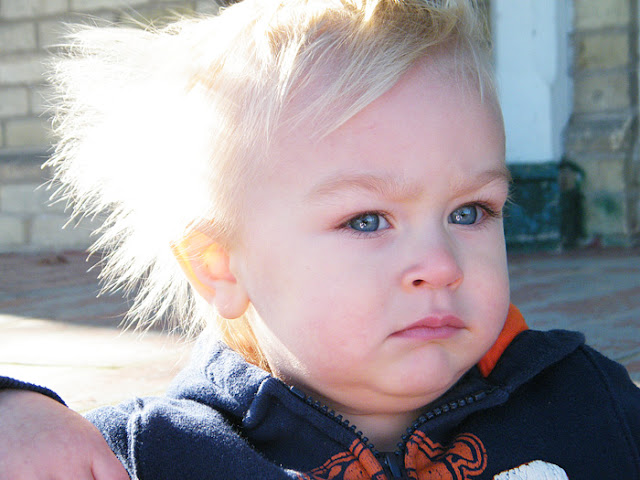 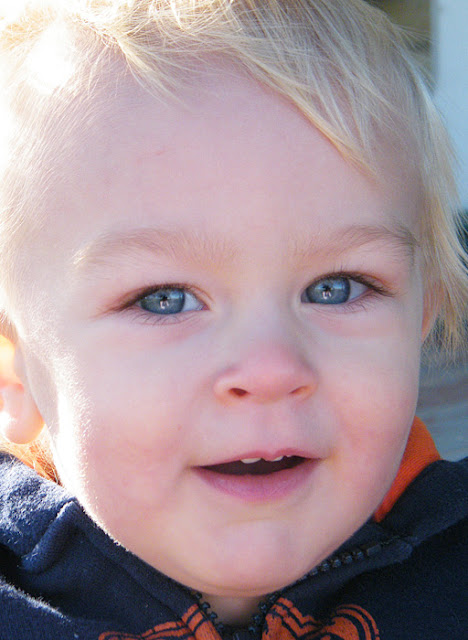 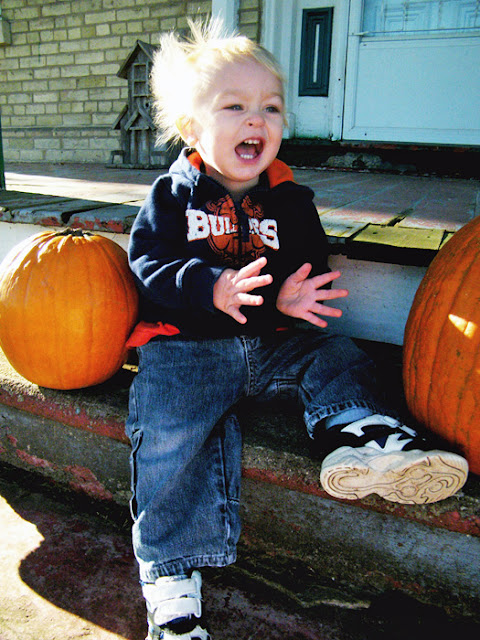 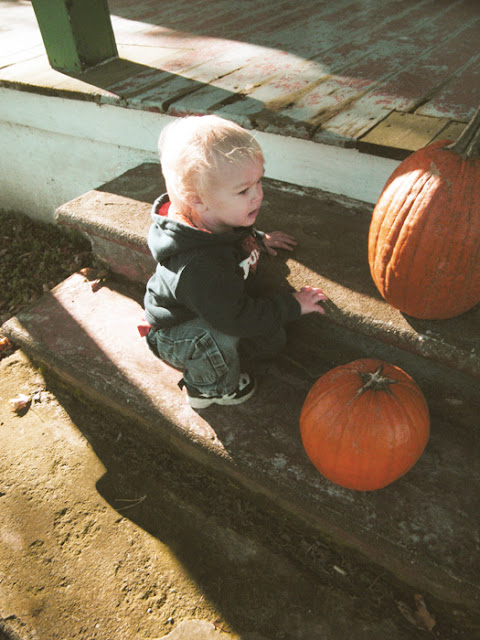 Fourteen months old! My baby boy!
Deklan loves to laugh and play, he's still a bundle of energy all day long. The only time he stops is when he sleeps. ;)
He's really starting to talk, now, too.. he can say Mum-ma (That's me! *grin*), Da-da (Daddy), Day-dee (Brady), Tookie (cookie), Pup-pup (puppy), Pawpaw (Grandpa), Baw (ball), Tee-tee (Kitty), and he copies animal noises (Grrrr), and tractor noises (Brrrrummmmm)! He also says "Mmmmmm!" when he eats something really tasty.
He loves his cousins, he has so much fun with the bigger kids, and his BFF is Hannah. They are great buddies! He loves his little cousins, too, baby Brianna and baby Aryanah. He gives them kisses and hugs, sometimes a little too enthusiastically! Poor babies! ;)
He loves animals, especially dogs. He's starting to learn how to pet them gently instead of pulling their fur, which makes Lucy happy I'm sure.
He gives awesome hugs and kisses, but only when he's in the mood to do it! If I ask for one, and he doesn't want to, he gives me the cold shoulder. Ouch. ;)
Deklan, you are so loved. Happy 14 months! Love, Mommy. 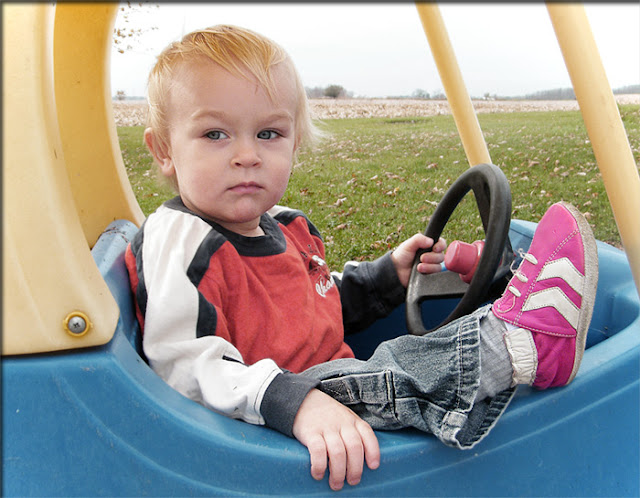 I hope my son will never have to confront the horror that is breast cancer. I hope he will not have to face it alongside his wife, his daughters, his friends, his aunts, his cousins, his grandmother, his mother...But if he ever does, I am glad for the people who work to fight it, to find the cause and the cure.

October is Breast Cancer Awareness month! Fight back, and spread the word. Go to i heart faces to see more pink.

... is when I started writing this.
When will I finish? I don't know. Because there are a lot of distractions a happenin'.... I'm feeding a 14 month old baby his breakfast, which means that at any time I will have to dodge a surprisingly speedy throw of either a piece of pancake, a plastic utensil, or an empty but still sticky yogurt cup. Also, said baby may at any time begin to complain -loudly- because he's finished with his breakfast, and how dare I leave him for .2 seconds in his high chair when he's FINISHED his BREAKFAST.
Also, I have pancakes in the pan, which are probably burnt right now......
Yep. Burnt.
Those dots were the written equivalent of me running to the stove thinking "Crap crap crap" and finding two very, very black bottomed pancakes. Oh well, the pancakes weren't that tasty anyway. I've made better.
Tyler is working today, and after he's done at work he's planning on going to the bush. So in the next three hours, I have to make some soup to take for his lunch, I have to bake cookies (not really a HAVE to as much as a NEED to... those chocolate chips have been staring at me for days) I have to vacuum the house and really should mop it but it won't get that far today, I have to bath a stinky sticky baby, I have to do dishes, I have to... well, there's a lot of stuff.
Bathing the baby just became number one on the list, because D-man has figured out how to wiggle his leg out and stand up in his highchair. Sigh.
Hopefully I will be able to post his 14 month pictures later today, after we get home from the bush. :)
Have a good weekend!
(it's now 9:17 AM, not too bad for time...)
Posted by Sarah at 9:17 AM 4 comments:

I Heart Faces "In the Orchard" 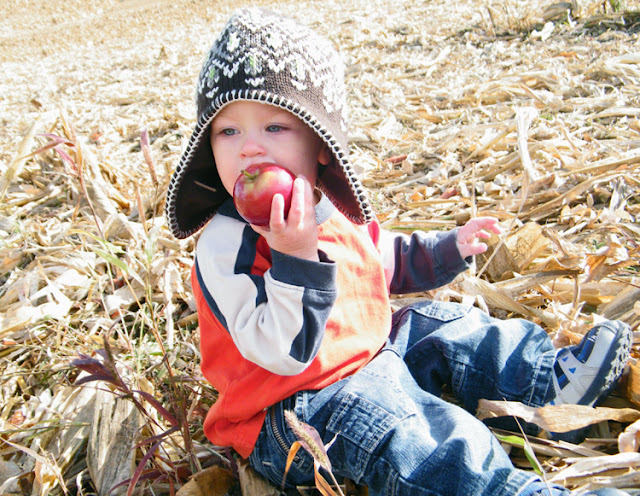 I don't have access to an orchard...
But I do have apples!
And a baby boy who loves to eat 'em.
Go see more at I heart faces!
Posted by Sarah at 5:53 PM 5 comments:

It's Thanksgiving weekend here in Canada, a time to pause and  to think about what we  should be thankful for.
So, in no particular order, I'm thankful for
~baby boys
~strong manly arms (not mine, although I could still kick Daniel's bum.. ha! Inside joke. Yep. One of thooooooose things that everyone looooves.)
~sunshine
~coffee
~life
~God
~nephews & neices
~bacon
~my home
~autumn
~squiggly lines
~eyeglasses
~answering machines
~baths
~blue paint
~the guys that pick up my recycling and take it away forever
~my camera
~warm fuzzy socks
~flannel pajamas
~cute baby bums
~cute baby toes
~cute baby hands
~cute baby smiles
~family
~Tyler
~Canada
~grass
~flowers
~birds
~creation
~diamond rings
~rice flour
~doggies!
~humour
~work
~and, wine. Especially when my hands are sore.
What are you thankful for?
I give thanks for my son, who was a hoot today at the big family Thanksgiving gathering. He made everyone smile with his busyness and friendly nature, he's a little punk! And I love him. Here's a few pics from today.... 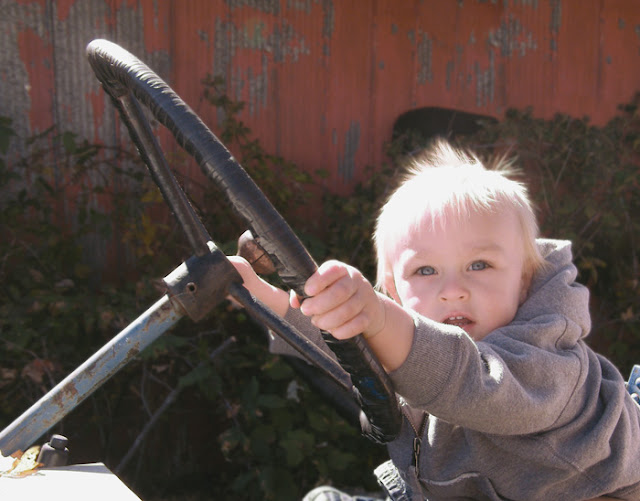 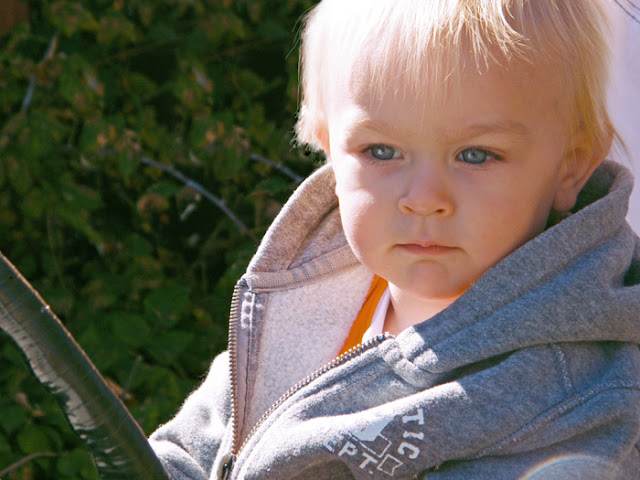 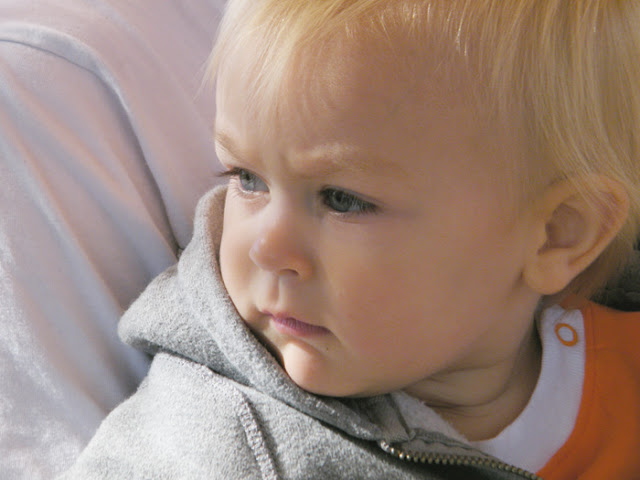 Those were the best ones! My camera was really acting up. Not sure why.... it kept switching the white balance on me, the silly thing. I had to edit every picture. :P
Happy Thanksgiving, everyone! :)
Posted by Sarah at 6:11 PM 3 comments:

Tyler's maternal Grandma passed away a couple weeks ago. She was 90 years old.
She died on a Wednesday, after celebrating her 90th with all her friends and family the previous Saturday.
I didn't blog about it, because I didn't know what to say. I still don't know what to say. I know my Mother-in-law, who I love dearly, is brokenhearted. It's easy for someone like me (cynical, abrasive, insensitive, etc) to say "She was 90 years old, it was just her time, you have to move on." But that's wrong. Death is never easy. It doesn't matter if the person is 90 or 9, it's still a loss. And losing sucks.
It is comforting to think that we will see her again in Heaven, but we're here on Earth. Without her.
It hurts to think that I'll never get to play cards with her again. She was quite the feisty card player... I have never been called a "son of a b!+ch" by an 89-year-old, until I played "Bugger your Neighbour" with Grandma, and had the audacity to win.

I was never able to try one of her cookies, but I'm told they were the best. Every Easter, Thanksgiving, Christmas, without fail if there was a family gathering there would be COOKIES! Chocolate chip ones, the biggest I've ever seen.  Her children and grandchildren would fight over them. It's true. There may have been some hair pulling and face scratching last Christmas.... Tyler may or may not have been involved.

I'm don't cry very often... I didn't cry when Tyler proposed to me, I didn't cry at my wedding, I have never cried at any other wedding I've been to, and I've even been to a few funerals and I don't remember shedding a tear.

But I bawled (unexpectedly) at Grandma's funeral. Probably because I love my Mother-in-law, and when she got up to give her speech, I was SO proud of her for making it all the way through it by herself! She was the only one of Grandma Mawson's kids who was able to give her own speech. Everyone else had a daughter or daughter-in-law read it for them, and Lesley and I were warming up the bench (so to speak), but she did it herself. The whole time, I was thinking "You can DO it, Mom! You can do it!" and when she made it through, the tears just came.

It was not a pretty cry. Some people cry, and they shed one tear and it's all glistening and perfect like a tiny diamond upon their smooth, spotless cheek...

I hate those guys.

No, when I cry, my nose gushes like a faucet, my face resembles the grimace of a gargoyle with angst, the skin around my nose and eyes becomes all red and splotchy and refuses to return to normalcy even after I'm done crying. Red rimmed eyes, protruding veins on my forehead, I get all the less-than-attractive symptoms.

I wasn't concerned about how I looked, though. (I was concerned about where to wipe the tears and snot, though, so I had to ask my husband to go get some kleenex... totally wasn't prepared.) The Bible tells us to mourn with those who mourn, and I was. I will miss Grandma, but I know my job isn't to break down and cry all the time, it's to be strong for the ones who do need to cry. Like my Mother-in-law.

I'll miss you, Grandma... see you someday. Save a spot at your card table for me.
Posted by Sarah at 8:59 PM 2 comments: